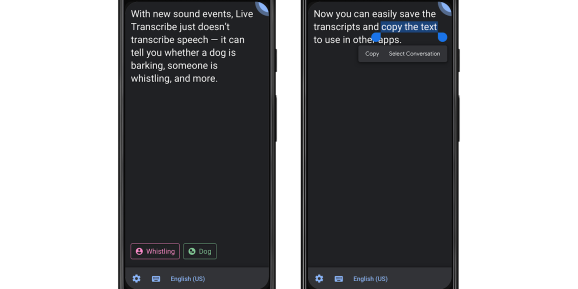 Working around the cloud

As a result, the speech engine closes and restarts streaming requests prior to hitting the timeout, including restarting the session during long periods of silence and closing whenever there is a detected pause in the speech. In between sessions, the speech engine also buffers audio locally and sends it upon reconnection. Google thus avoids truncated sentences or words, and reduces the amount of text lost mid-conversation.

To reduce latency even further than the Cloud Speech API already does, Live Transcribe uses a custom Opus encoder. The encoder increases bitrate just enough so that “latency is visually indistinguishable to sending uncompressed audio.”

Google lists the following features for the speech engine (speaker identification is not included):

The documentation states that the libraries are “nearly identical” to those running in the production application Live Transcribe. Google has “extensively field tested and unit tested” them, but the tests themselves were not open-sourced. But, Google does offer APKs so that you can try out the library without building any code.